I HAVE A DREAM…! To many, a laughable dream. To some, an unachievable dream. To others, perhaps, a dream worth dreaming and thinking about:

With all the wealth, with all the people, with all the technology, the social media, and all the resources we have, surely, wouldn’t you think we would have achieved World Peace by now?

It’s been decades since Dr. Martin Luther King jr. gave his iconic speech, Mahatma Gandhi has long since passed into the annuls of time, Nelson Mandela is no longer imprisoned on this plane, and the lyrics to John Lennon’s amazing song are mere ‘Imagine-ation’… So where are our new Peace-leaders going to come from?

#BeTheChange has that been taken yet? What would the great Peace-Leaders of old have made of the Internet? Would they have made a bigger impact, or would they have been easier targets for trolls, lobbyists, and nay-sayers? We can only speculate… So, who is brave enough to pick up the baton of peace and start running with it now? 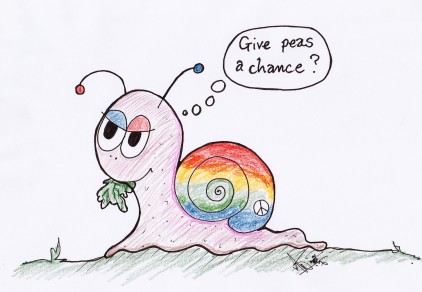 He may not be the smartest contender, but look at who he’s up against…? More to the point, let’s look at what he is achieving with very limited resources compared to our World Leaders. He’s already on a campaign to raise 10,000 Euros to help homelessness in Dublin! That might not sound like much, but he’s only a month old and has raised over 500 Euro already! Just imagine what he could do given the chance…?

And this little charity snail isn’t stopping with homelessness, through Charlie’s Causes he’ll be making a massive impact in all sorts of other areas too!

World Peace may be a few years off yet, but just imagine what we can achieve as we journey towards that goal…? If not now, when?

I’m not sure that procrastination is the opposite of impatience, but there is a lush green meadow between the two where the sun is constantly warm and the time is always right. I’m an impatient person, and an impatient writer, I openly admit that. I guess that’s why I love blogging! It allows immediate release of that creative urge. But I only blog when the time is right. That said, I have just published two books – almost back-to-back – one after 32 years, and the other after 19 years. So what does that tell you about me?

Like many writers, I wanted to have them published as soon as I finished writing them. I thought they were ready for the world and the world was ready for them! However, I have also been told I am a writer ahead of my time. As I grew up, I was constantly being compared to writers of the past: CS Lewis, Shakespeare, Beckett… Flattering as that may have been, it didn’t curb my impatience! I wanted the world to hear me NOW!

But nobody was listening.

We live in a deafeningly silent world. Don’t get me wrong, there’s a lot of noise, an awful lot of noise, AWFUL NOISE, but nothing is really being said. Everybody is screaming, “Listen to me! Listen to me!” but when they get the mike, what do they actually say?

Okay, you’ve got it. What do you want? They don’t know. It’s like lottery winners that lose it all within a few years, and all their friends, and all their happiness, and… They can’t ever go back to how it was before.

What is it you want? And what is your impatience? What do you lack now that makes you want it so badly? If you think you ‘deserve’ it, can you justify that? When you have two ears, two eyes, and only one mouth, what makes you use them disproportionately? Do you really have something to say?

I don’t write to feel good about myself. I don’t write to pass the time. I don’t write to become somebody. I write because I am a vessel. I take no credit for what I write, it just flows through me. I started ‘channeling’ when I was an early teenager. I called them my ‘writing guides’. They would talk and I would write. I’m not religious, in fact I rate religion right up there with tattoos! Graffiti your body as you wish, and graffiti your mind at your peril.

So What Does This Have To Do With Impatience?

Why the rush? If you’re writing to make money, most likely it won’t happen. If you’re writing to share the latest, greatest thing, they most likely already know. In fact, if you are doing anything that isn’t getting you in touch with who you REALLY are, you’ve missed the whole point of being alive in the first place (assuming you ARE actually alive!)

You want me to notice you, but how much time do you give to noticing me? Or for that matter noticing yourself?

One day there will be an ‘app’ for that.

“I love to write, but I hate to promote myself!”

Can any of you relate to that? We could all probably substitute ‘write’ for whatever we are passionate about. However, promotion is what gets us noticed, and being noticed is what counts these days, right?

In an attempt NOT to be noticed, I thought I’d slip this in very late over the weekend…

It’s a book I’ve been sat on for about 19 years – yes, I have a habit of sitting on things (chairs mostly, as I write for part of my living!) and not sharing my personal feelings – but it got read recently, and well… I got persuaded to share it, finally.

“Don’t read it if you don’t like crying! It WILL make you cry.”

I’ve been told a lot recently, that I must like making people cry. Honestly, I don’t. I write what comes from my heart and my soul. This is a very personal collection of ten letters that I’ve wanted to share for many, many years.

If you want to read them, either click on the book cover (which I hope you like) or click on this link: Dear Dad – The Letters Home.

Anthony James Donnelly is an author, actor, motivational and business coach, life guide, and entrepreneur. He has spent over 20 years working directly with individuals and corporations to adjust their perspectives on life and business. In his best selling publication, “My First Goal-Setting Book: How To Effectively Set & Achieve Your Life Goals”, he concisely explains how to get whatever you want out of life by following his simple, tried and tested steps.